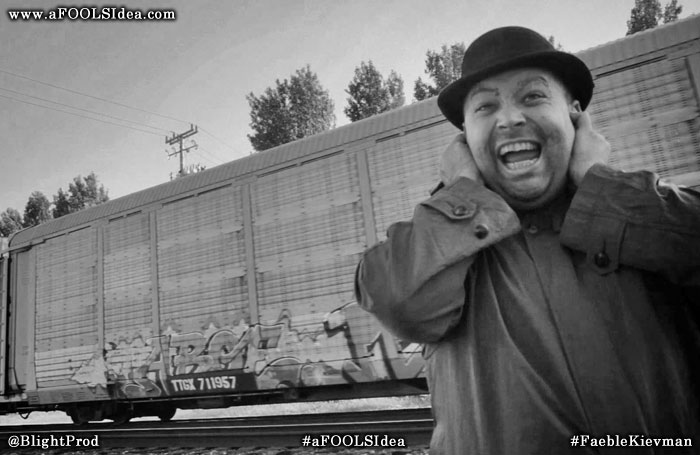 "Humans Are Weird (An Artists Journey to... by blightproductions
Continue
Next →← Previous
← →

HUMANS ARE WEIRD with Faeble Kievman! (An Artists Journey to Creative Freedom)

“When I was an activist, I was doing all these projects and proposals to get people to implement these ideas I had…and I’ll tell you what, the majority of the time people wouldn’t listen to me. What would happen is it became a lot of chitter-chatter. It was really difficult, people just…like…had their ideas and they were stuck on their ideas. When I did a show for the first time, people sat down and they watched me…intently.  I could show people my ideas, that gender is fluid, and that society doesn’t rule all, by being a clown, by performing and showing them my vulnerabilities. “ – Faeble Kievman

His unique journey through life is reflected in his unconventional sense of humor and his personal philosophy will have you reassess what it means to be truly free.

“When I go on stage, I feel absolutely stupid…I feel embarrassed…almost…that I am about to go on stage and do these really embarrassing things, and I’m like “Gosh, why am I doing this”, sometimes…you know. But the question is why isn’t everybody doing this? Why isn’t everybody sharing the things that are vulnerable about themselves so that they can open up” – Faeble Kievman

Faeble trained under master Lu Yi in Chinese circus skills and Chinese acrobatics at the San Francisco Circus Center. He has performed in the China Wuqiao International Circus Festival, Nanjing International Circus and Comedy Exchange Festival, Circus Zoppe, The New Pickle Circus, Sardine Family Circus, along with clowning around internationally with his company Cirque en Deroute where they have won over audiences in festivals like Berlin Latch, Pornichet Festival du Cirque, Aurillac Festival du. Most recently he worked with Circus Bella in Japan, the Artistic Director for A Spaghetti Western Circus Comedy show in California and a six month European tour with Cirque Starlight!

————————————————————————-
A portion of the proceeds raised through our Patreon page to support Faeble’s episode of the series will aid in the front-lines against abuse and be donated to http://globalhumanrights.org & http://www.ncpc.info/!
————————————————————————-
A FOOL’S IDEA is an independently produced large-scale documentary project exploring the lives, loves, passions, fears, inspirations and work of some of the worlds most eccentric performing artists.  With over 16 short-form documentaries and 21 long-form podcast interviews and counting!

Also take a minute to discover Blight Productions on other social networks & websites: