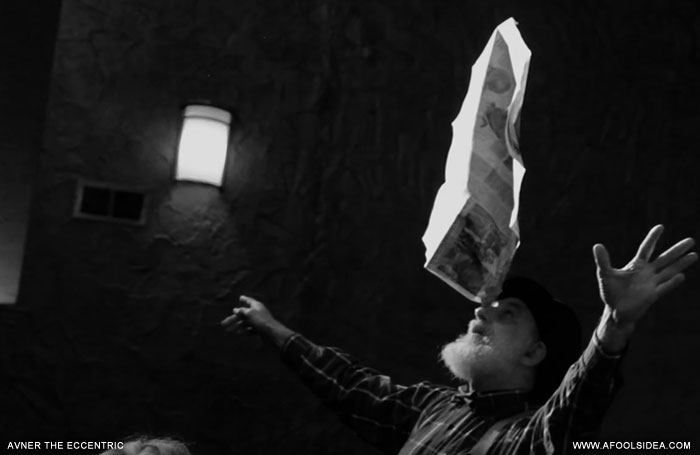 "I Was Born Hungry & I'll Die Hungry..... by blightproductions
Continue
Next →← Previous
← →

Avner The Eccentric In “I Was Born Hungry & I’ll Die Hungry…”: A FOOL’S IDEA – PRESENTS

“A FOOL’S IDEA – PRESENTS: AVNER THE ECCENTRIC IN “I WAS BORN HUNGRY & I’LL DIE HUNGRY, BUT IT FEELS SO GOOD TO FILL UP IN-BETWEEN.””

From the EMMY award-winning creators of “ART or something like it!” comes a brand new chapter in the esteemed artist profile docu-series “A FOOL’S IDEA — PRESENTS” featuring the world-renowned vaudevillian, hypnotherapist, juggler, mime, expert NLP (neural linguistic programming) teacher, magician and master eccentric performer – Avner Eisenberg (AKA “Avner the Eccentric”).

Possibly best known in pop-culture for playing the titular role in the 1985 film “Jewel of the Nile” (co-starring Michael Douglas and Kathleen Turner), as well as a guest appearance in the 1986 hit television series “Webster”. However, before all that, in 1984 Mr. Eisenberg became the first solo performer to take over New York’s theater district with a hit Broadway clown show called “Avner the Eccentric”.

“I remember standing backstage at opening night on Broadway…and there were lots of movie stars and all the New York press… and starting to talk myself into getting worried and then going…wait a minute…my character has to be naïve. And I just let go of all that, went out and did the show and got good reviews and ran for almost a year!” — Avner Eisenberg

Currently, he travels the world with his incredible one-man show “Exceptions to Gravity” while teaching the ancient & powerful art of eccentric performing.

“I’ve discovered a lot of very interesting…sort of…they’re not anomalies obviously, but they look like anomalies of balance. Balancing things in surprising ways,” says Mr. Eisenberg; continuing with, “I think the basic idea is a kind of reverse engineering, of finding a trick that I could do and then saying…okay, that’s the solution…what was the problem?”

His unique scientific approach to stagecraft, comedy and teaching has led to incredible breakthroughs with professional performing artists from all around the world.

“Most of my creativity is going into teaching others, and also to doing directing and coaching. And I have a series of principles, eccentric performing principles, that are a pretty good guide for creating and maintaining rapport with the audience and with one’s partners, and then looking for the comedy in terms of problem solving.” — Avner Eisenberg

Using the skills he has learned as a professional hypnotherapist, as well as being an expert practitioner of NLP, Mr. Eisenberg teaches his students how to understand what is going on inside the human brain, so they may be able to create stronger, more authentic connections when performing for an audience.

“It’s not about costumes, makeup, funny faces, funny voices…it’s the attitude you have to solving the problems that you find along the way to doing your job.” — Avner Eisenberg

Also take a minute to discover Blight Productions on other social networks & websites: