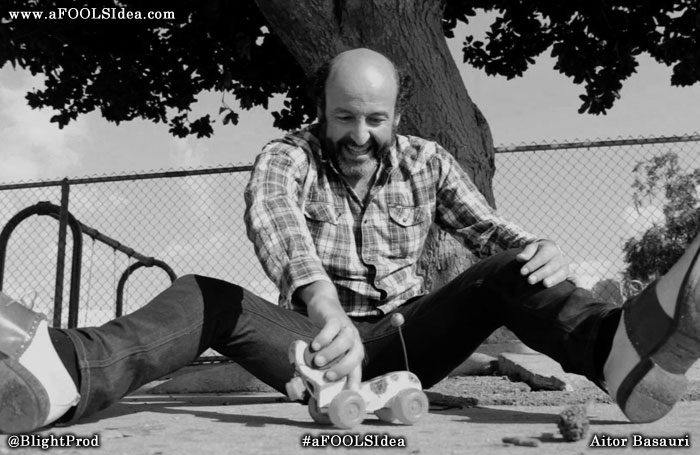 “WE ARE IDIOTS - the Absurd Adventures of a Spy... by blightproductions
Continue
Next →← Previous
← →

Aitor Basauri in “WE ARE IDIOTS” the Absurd Adventures of a Spy Monkey: A FOOL’S IDEA – PRESENTS

Welcome to a totally NEW episode of A FOOL’S IDEA, featuring the incredibly funny – Aitor Basauri  (joint artistic director & performer in the world famous UK based physical comedy theater company Spy Monkey). Take a journey with us through the ups and downs of life in one of the most hilarious theater companies in the world!

“I believe…all human beings…the common denominator is that we are idiots. Some of them are much better at hiding it. I am not so good…” – Aitor Basauri

Aitor shares his journey of self-discovery, learning the art of being funny and realizing that maybe he was not actually meant to be a dramatic actor.

“And I kind of remember one day saying…I will be an actor, because I love being on the stage…and I will be a bad actor. That day was a liberating day for me because I suddenly didn’t feel the pressure to be good or bad…I just had to have fun.” – Aitor Basauri

Find out what happens, when a large scale Vegas show, doesn’t go quite as planned! Discover a few life tips from a create comedy actor and learn how to make the world a little better.

“Perhaps, it is a good idea that if everybody would have a sense of humor about the things that are fucked up in this world…perhaps everybody would be much more ready to repair them.” – Aitor Basauri

Aitor studied at the Centro Andaluz de Teatro in Seville and at the Philippe Gaulier School in London. Performed in The Servant of Two Masters at Sheffield Crucible (1996), Axomate at the Seville Expo (1992), Eulenspiegel (1991) and in Karl’s Kuhne Gassenchau’s Grand Paradis and Stau in Zurich (1997 and 1998). Director of Little Prince for Donkey Productions (1997), Un Vento Impetuoso for La Canoppia (1996) and Meci Y Me Fui for Pez Enraya ( 1997). In 1999 he appeared in Circus Knie, the Swiss State Circus, and in 2000 formed his own company Punto Fijo, based in Bilbao. Appeared in Cirque Images’ 2003 series Solstrom for Bravo Cable Network. Performed in Zumanity – Another Side of Cirque du Soleil at the New York New York Hotel Casino, Las Vegas, 2003-05. Appeared in Bertold Brecht’s Senor Carrera’s Rifles at the Young Vic, directed by Paul Hunter (2007).

He is a regular teacher of Spymonkey masterclasses, at the Philippe Gaulier School in Paris, and for clown doctors all over Europe.

————————————————————————-
A generous portion of the proceeds raised through our Patreon page to support Aitor’s episode of the series will be donated to The Gay & Lesbian Victory Institute at www.victoryinstitute.org.

Please share, tell your friends about the episode, help support a great cause, and introduce your world to this amazing artist! Thanks!
————————————————————————-
A FOOL’S IDEA is an independently produced large-scale documentary project exploring the lives, loves, passions, fears, inspirations and work of some of the worlds most eccentric performing artists.  With over 18 short-form documentaries and 21 long-form podcast interviews and counting!

Special Thanks To:
Anne Kugler
Spy Monkey
&
The Schkapf Theater